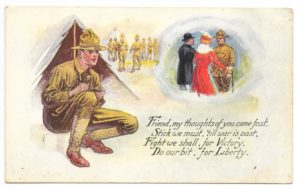 The First World War saw an unprecedented number of young men enlist in the armed forces, and National Guard units quickly mobilized for overseas service. This left a shortage of available manpower to properly defend local citizenry who lived in fear of German sabotage, and many men who; through age or infirmity, eager but unable to serve on the battlefields of Western Europe. At the same time, the United States military was facing a glut of new recruits which it was unable to adequately train in large numbers. Local “Home Defense Corps” such as the one raised in Washingtonville in the spring of 1917 provided military training to local men who were too young or old to serve overseas, while aiding in fundraising drives for war bonds, and made the local citizens feel safe in the knowledge that their neighbors were protecting their interests on the home front.

The origins of Washingtonville’s Home Defense Corps can be traced back to the “Preparedness Movement”, initiated by former President Theodore Roosevelt and General Leonard Wood in 1915. Fearful of America’s under-strength military and the belief that the United States would eventually enter the war in Europe, Roosevelt and Wood established training camps where young men would spend several weeks receiving professional military training without having to commit to enlisting in the armed forces. Although the “Preparedness Movement” was not affiliated with the United States government, it was actually a response to President Wilson’s non-interventionist stance to the war prior to America’s involvement, by the spring of 1917, local defense corps began cropping up to train prospective soldiers for war [1].

On April 3rd, 1917, three days before war was officially declared, New York’s Governor Charles S. Whitman proposed for “The formation of home defense corps was urged upon County Judges, Presidents of County Boards of Supervisors and Mayors of all cities of the State…the corps, which would be directly at the command of the Governor, would be composed of men 45 to 64 years old, and those who for various reasons were unable to enlist in the army or navy.” [2] Considering Washingtonville’s population of roughly 660 people and the dependence on able bodies to support its farm-based economy, the idea of establishing an organization where individuals could participate in the war effort without fear of being called up was enticing. Peer pressure and fear of being labeled a “slacker”; one who did not sign up for selective service, or critical of the war, also may have helped. In July, 1917 the Washingtonville Home Defense Corps was established, and comprised of 40 to 50 members. The organization was led by Captain Isaac Nicoll, and his brother, 1st Lieutenant Alfred Nicoll. As the organization was volunteer based, both were elected by their men, but both received commissions from Governor Whitman.[3]

Much of what we know of the Washingtonville Home Defense Corps comes from a lengthy letter written by local teamster David H. Moffat in the fall of 1917. David’s letter goes into great detail of the corps organization, while showing the author’s sense of pride and personal enthusiasm for the effort.

Although initial turnout for the corps was promising, news of allied losses on the western front, and the hard realities of war had dimmed interest in the group. In October 1917 David writes:

“After securing an enrollment of about 45 members the company grew very slowly. Some seemed to fear they would be called from home in a few weeks time if they joined and others that our destination was across the water. Then there were quite a number who were under age and could not persuade their parents to consent to their joining as the following: Geo. McNeil; Harry Strong; Fred Bassley; John Van Duzer, E Richmond; Beside these, David Wright and Raymond Seaman had to return to school, and two or three had moved away or were not passed by the doctor.” [4] 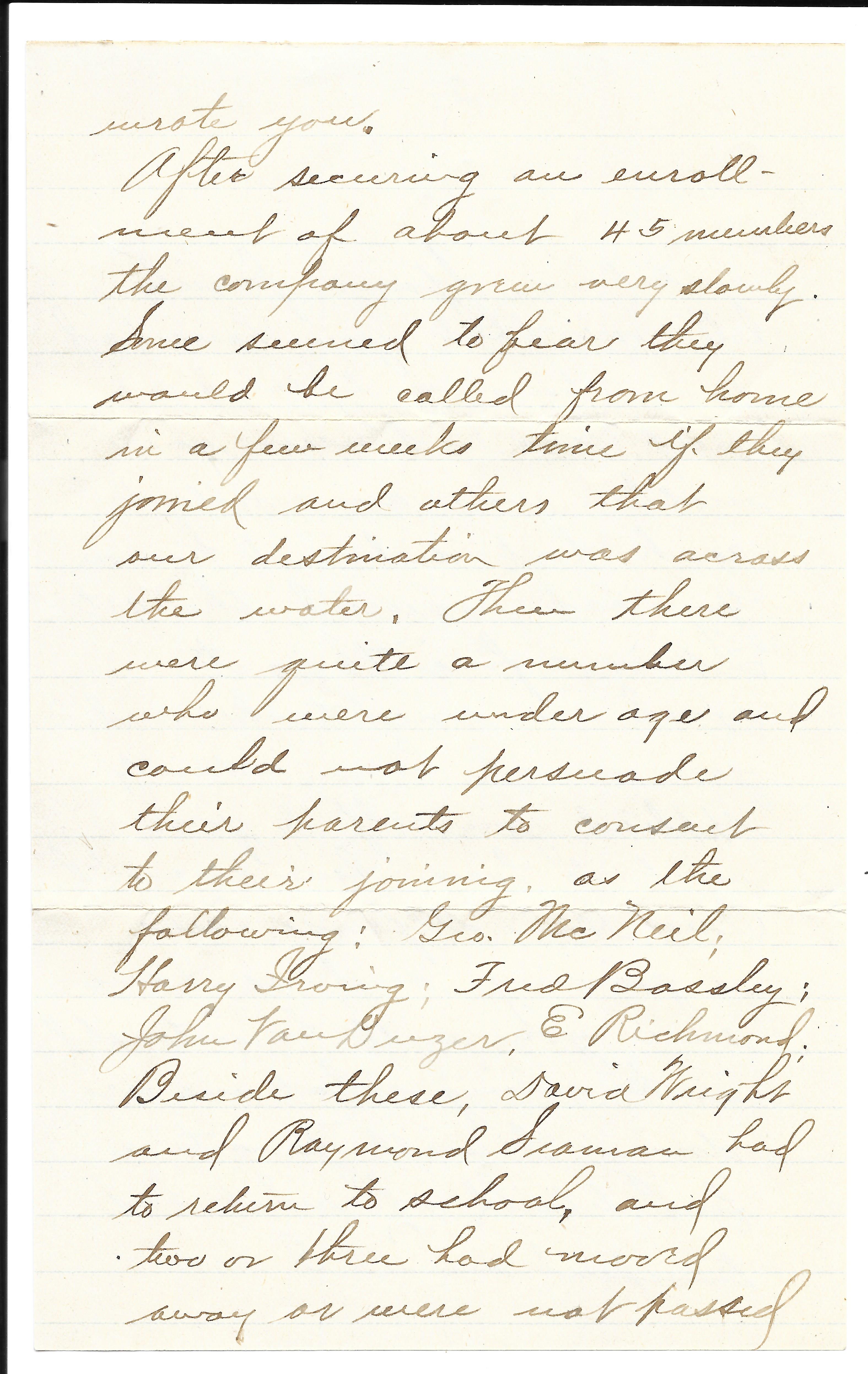 For those that passed muster, the next step for an enlistee in the Washingtonville Defense Corps was to be fitted and issued with their uniform. In February, 1917 the War Department estimated it would take 9-12 months for 1,000,000 recruits to receive their uniforms, and 12 months to issue small arms and equipment [5]. Like the United States military, the Washingtonville corps also suffered from a lack of proper uniforms as the war economy slowly lurched towards mass mobilization, and the needs of enlisted men outweighed those of the civilian corps:

“We were measured for uniforms in August but on account of one thing or another order was not placed until about the first of October. Those of the company who had fulfilled all the requirements received their suits one week ago today. The uniform is of wool and in color approaches the olives and all pronounce it a very handsome suit. They arrived from New York Friday and distribution was made Sunday morning at nine O’clock at the Fire House. The hat is the regular army hat with green hat cord. I can tell you we felt quite dressed up when we got them on.”  [4]

Of course not everyone was happy: “When we first saw Mott Tuthill in his uniform we dubbed him “Teddy” for the resemblance is certainly strong He does not seem at all pleased with the name but it quite amused his father.” [4]

Although their uniforms were late in coming, the Washingtonville Corps could consider themselves lucky to have a set of clothing in time for a parade in Goshen, where they showed up their rivals in the hometown  defense corps:

“On invitation from the Goshen Corps. we attended a parade there Saturday afternoon to celebrate the opening of Goshen’s new concrete streets. Chester, Tuxedo, Warwick, and ourselves were there. Our boys did themselves proud and all said they looked fine, which makes us all feel quite chesty. We could not help but feel sorry for the Goshen boys for they ordered their uniforms about the time we did and fully expected to have them for this event. However they had only their hats and were as sour a lot as you could imagine.”

Being a member of the Washingtonville Defense Corps was not all parades and social gatherings. Members were required to attend drill once a week; usually on a Tuesday or Thursday, which included target practice, and arms drill [6]. As the U.S. military could not afford to issue its own troops with proper rifles and equipment in a timely manner, led alone a civil defense league, the members of the Washingtonville Corps had to make due with what they could bring from home:

“Last year my cousin Walter Moffat made me a gift of a Savage repeating rifle of 30-30. It is a dandy, and I never have had a rifle so well balanced for it lays as steady in the hand as can be. It does good service at drill Mondays and Thursdays in our Home Defense Corps.”

As for the rest of the men they used: “shotguns and rifles-some of are old vintage.” [4]

Their training with shotguns and antique rifles did eventually pay off. According to a record of war related activity in the Village written around 1920, the Washingtonville Defense Corps:

“became very efficient in close order drill, interior guard duty and arms manual. At a competition drill between all of the companies of the county, the Washingtonville Company under the command of Captain Nicoll won first prize on July 4, 1918” [3]

The Middletown Times Press also praised the Washingtonville corps with being:

“One of the largest and best equipped in Orange county, and on parades in various sections during the past year.” [6]

Apart from military training, the corps also participated in Liberty Loan Drives, which were used to raise funds for the war effort, as well as provide a pool of prospective candidates for military service. Isaac Nicoll, who had served as captain during the early part of the unit’s history, was eventually called into active duty as a 1st Lieutenant in an “Ordinance Company” on July 26th, 1918. He would spend the war overseeing the supply operations at the Raritan Arsenal, and Fort Schuyler [7]. Like his brother, Alfred Nicoll would also serve at Raritan Arsenal as a 2nd Lieutenant [7]. In their places, chauffer William Ross, and farm laborer Henry Brewster became Captain, and 1st Lieutenant respectively [3].

Although they did not serve “over there”, the Washingtonville Defense Corps played a part in raising enthusiasm for the war at home, while providing valuable training to prospective military officers and men for overseas service. Being able to serve in a military capacity with friends, family and neighbors might have also given extra incentive for men to serve with people they knew. The patriotic zeal with which these men showed was not lost on local citizens like Elsa S. Gerow: “The Home Defense
suits are awfully good looking I think – I saw our boys all ready for a short hike the other day – they were a fine appearing lot – hardly knew some of them.”
[8]. Most importantly, their service did not overshadow their peacetime occupations, allowing for the production of goods and materials to be sent overseas to their comrades serving on the front lines.