On November 6th, 1917, Women of New York State won the right to vote in state elections. This was no mean feat, as it took nearly 70 years of protests, demonstrations, and civic activism; from the Seneca Falls Convention of 1848, to the passage of Amendment 1 in 1917, for New York’s women to be granted suffrage. It would take another 3 years after this momentous decision for women to win the right to vote in national elections under the 19th Amendment to the United States Constitution. In honor of tWomen’s History Month, we look at one of the many civic organizations that helped the women of Washingtonville and Blooming Grove have a voice in their community. 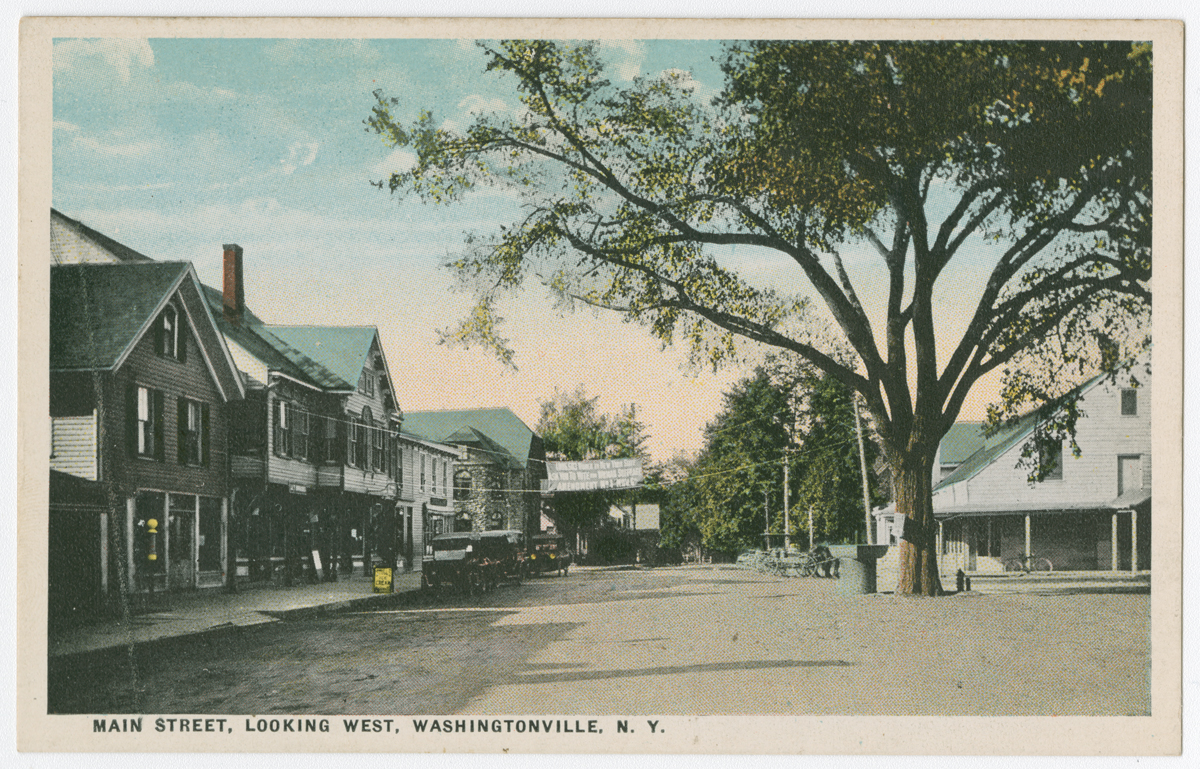 This postcard has a remarkable story to tell. Modern residents of Washingtonville may recognize this image as the view from West Main Street; heading towards Chester. To the right,  the old elm tree, and  watering trough, frames the general store owned by George Owen; first built by Samuel Moffat III in 1812. To the left is the “Armenian Building”, which served as a local market. The stone edifice of the First National Bank can also be seen further down the road. At first glance, this postcard is interesting, but not too different from the other postcards in our library’s local history collection, that is until you focus on the banner in the center of the photograph.

Although the origins of the women’s suffrage movement in the United States can be traced to the Seneca Falls convention of 1848, it was not until the early 20th century that Suffragists were able to organize themselves into effective political organization. By 1916, the National American Woman Suffrage Association (NAWSA); originally formed in 1869 by Susan B. Anthony, and Elizabeth Cady Stanton, had grown to 2 million members under the direction of Carrie Chapmann Catt. Catt was the driving force behind a strategy known as the “Winning Plan”,which  involved supporting pro-suffrage candidates and reforms at the local level, using victories obtained at the state level to push for a federal amendment for women’s suffrage. This plan would be financed in part by a large endowment left by wealthy author and publisher Miriam Leslie, as well as a board of trustees who worked full-time to organize fundraising, lobbying and advertising campaigns for the movement. [1]

As Catt and her staff of the NAWSA organized the movement nationally from their New York City headquarters, individual suffrage clubs in villages, towns, and cities throughout New York began to organize locally. The January 18, 1917 edition of the Middletown Times-Press; the future Times Herald Record, reported the efforts of such a club in Washingtonville:

Washingtonville, January 18- The Washingtonville Woman’s Suffrage Club, recently organized, met with Mrs. W.M. Leonard, on Tuesday afternoon, the president, Miss Helen Tuthill, presiding. The other officers are: Vice-President – Mrs. W.M. Leonard, Recording Secretary – Miss Seybolt, Corresponding Secretary – Miss McLaughlin, Treasurer – Miss Glover. Miss Loomis read an article of much interest. Miss McIInhinney, Mrs. Leonard and Miss Loomis were appointed a committee to plan a study course. Meetings will be held on the third Monday of each month. There was an encouraging attendance and a number of new members enrolled.

The Chautauqua Circle, after a short study hour. attended the meeting, adding to the interest of the occasion. [2]”

Although little information is known about the specific activities of the club, we do have some information as to its members based on the 1915 New York State Census. Adelaide Leonard, 56, was the wife of William M. Leonard, a  veterinary surgeon who also served as Town Supervisor for Blooming Grove from 1914 – 1918. Helen Tuthill, a 34 year old house worker, lived with her mother Louise, who owned a local farm. Nell “Nellie” Seybolt, a 26 year old house worker, was the daughter of Everett F. Seybolt; grain seller, and Kate Seybolt. Louise Loomis, 43, co-owned a poultry farm with her partner Mary K. Fuertes. Marjorie Glover 24, lived at home with her retired father Andrew and was a house worker. Jessie McLaughlin, 28, was the daughter of local merchant Edward J. McLaughlin, and Hellen “Helley” McLaughlin. Unfortunately No Mclhinney’s have appeared in records consulted thus far.[3] The Chatauqua Circle was a club that promoted adult education in rural areas through guest speakers, presentations and entertainment. [4]

In addition to groups such as the NAWSA, and Washingtonville Women’s Suffrage Club, the women’s suffrage movement would be given additional momentum as a result of  the First World War. During World War One, women served as factory workers, nurses, and organizers of Liberty Loan drives. War work clubs, which collected bandages, and sewed clothing for troops and refugees overseas, provided additional leverage for women to make a case to prove their value in the voting booth. An aide to Carrie Chapmann Catt said to President Woodrow Wilson in July 1917   “Our hope has been to secure your interest and powerful influence…at the opening of the new Congress for a real drive for the enfranchisement of twenty million of American women, as a ‘war measure’ and to enable our women to throw, more fully and wholeheartedly, their entire energy into work for their country and for humanity, instead of for their own liberty and independence” [5]. Additional pressure from the National Women’s Party, lead by Alice Paul, and Lucy Burns, only increased tension as protestors holding banners that asked “How Long Must Women Wait for Liberty?”  became commonplace outside the White House gates. While addressing a June meeting of the Washingtonville Athenia Club at the Moffat Library, Mrs. John Francis Yawger, President of the New York City Federation of Women’s Clubs stated: “The funny part is, that the very men who urged the women to stay in their homes and who were ready to deny them the right of suffrage are the very ones telling women to go out and do things“. [6] 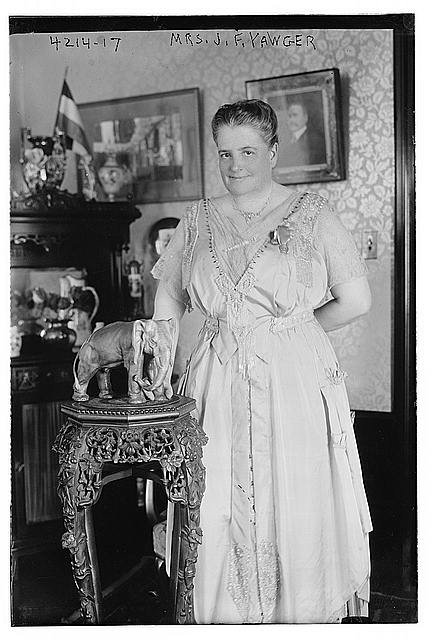 Photograph of Mrs. J.F. Yawger, June 1917. Image courtesy of the Library of Congress.

By the time New York’s suffrage vote arrived in November, over one-million names were collected by local, and national suffragist groups in support of the measure. The day before the vote, Carrie Chapman Catt issued an appeal to voters: “Remember that our country is fighting for democracy, for the right of those who submit to authority to have a voice in their own government. Vote for woman suffrage, because it is part of the great struggle toward democracy.”  [7]

The measure for women’s suffrage would pass on November 6, 1917, due to the organizational efforts of the NAWSA, National Women’s Party, and local groups like the Washingtonville Suffrage Club. The banner that hangs across main street in this centrury’s old postcard is a reminder of the ability for these women to organize and persevere to finally win the right to a democratic voice. As Mrs. Joseph Francis Yawger would say in her address at Moffat Library several months earlier: “The names of the women of 1917 will be written in gold”. [6]