This month we will be looking at historic cookbooks from our library’s collection! We hope these recipes will make your mouth water for some fun historical facts in time to impress your guests around the holiday table!

Today we’ll be looking at the 1889 edition of The Variety Cook Book of Washingtonville, N.Y. published for the Ladies’ Society of the First Presbyterian Church in 1889. The book was originally published in 1880 but “the edition was soon exhausted”. This newer version of the book was published following a high demand and was revised. The fly-leaf inset states “some recipes rejected and many new ones added, so that it is herewith presented to the public in much better shape than before.” Although some recipes were posted anonymously, others were attributed to local women associated with the First Presbyterian Church.

One recipe for Corn Pudding is attributed to Emily Beaumont (1840 – 1906), who owned property to the south of Brotherhood Winery. Her home would become the summer residence of wine company president Edward R. Emerson (1856-1924).

Draw a sharp knife through each row of corn; cut the kernals off; scrape the remaining pulp; add the above ingredients and put into a buttered dish; have a steady heat in the oven, not too hot, and bake from two to three hours; serve hot with butter.

NEW! - From Your Education & Recreation Resource (as of October 8, 2020) OUR WORLD TOUR THROUGH HORROR CINEMA CONTINUES! This week... read more 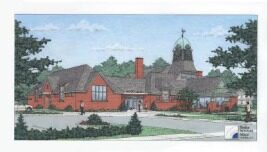 Everyone is eager to return to our beautiful historic Moffat Library building in the center of Washingtonville.  In 2013 The... read more