To commemorate Veterans Day, we don’t have a cookbook to share this week, but to keep with our theme this week’s post is food related! We’re all familiar with the image of the U.S. “Doughboy” of World War One, but what about what they ate? Fortunately for us, local First World War veteran David Wright Hudson (1893-1971) recorded some of the things he ate, and prepared while serving as a Mess Sergeant in Company L, 6th U.S. Infantry. 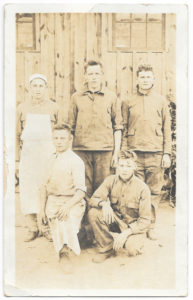 Although November 11th has been associated with commemorating U.S. veterans of all wars since June 1, 1954, when the Act of 1938 was amended, prior to the amendment, the day was set aside to commemorate Armistice Day, when on November 11th, 1918 news of a cease fire which ended “The Great War”, also known as the First World War, was announced. Outside of the U.S., other countries involved in the war, such as the United Kingdom, Canada, Belgium, Germany, and France still recognize November 11th as Armistice Day.

The Moffat Library’s Hudson Collection contains many items related to the First World War, and specifically David Wright Hudson, who served as a sergeant and cook of Company L of the 6th U.S. Infantry from 1917 to 1919. David’s letters home and his diary give us some idea of what it would be like cooking meals for over 100 hungry soldiers at bootcamp and the Western Front. On December 24, 1917, when David was at basic training at Chickamauga Park, Georgia, he wrote to his family in Washingtonville about the Christmas dinner he and several other cooks were preparing:

“We are trimming and preparing the dinner for tomorrow, I am on to roast the turkeys. To day [sic] the company received a barrel of 125 lbs of turkeys, so I helped clean them, we had twelve. Our Mess Sergeant made mince pies about 30 and the same of a three layer coconut cake. We have in our company eleven Lieutenants we can hardly step inside unless you run across there, and it keeps us at saluting.”

One year later David was on the front lines of Northeastern France where he worked in one of the many field kitchens that helped feed the men of the 26th Division, American Expeditionary Force (A.E.F.). During the First World War, U.S. troops had three main rations to draw from: The “Trench Ration”, which consisted of canned meats, such as salmon, and corned beef and sealed in tin cans to prevent exposure to gas attacks, the “Reserve Ration”, which included fresh bacon or canned meat, two 8-ounce cance of hard bread, also known as hardtack, a packet of pre-ground coffee, a packet of sugar and a packet of salt as well as a “tobacco ration”. Finally there was the “Iron Ration”, which had three three-ounce cakes made of beef bouillon and wheat, three one-ounce bars of chocolate, and salt and pepper sealed in a tin. The lack of variety and nutritional value of these staples meant David had to rely on local farmers for fresh produce when the opportunity presented itself. On October 24th 1918 he wrote his father:

“ A month ago we passed through a part of the country that we had stoped [sic] at when we first arrived over here. While here I went out through the country to buy some green vegetables, and I found potatoes were plentiful, as well as larg and big ones.I bought them at two (2$) a bus[hel].Then I bought cabbage, and tomatoes, as we were (225) men strong it takes lots to eat.”