Over the last two years, our local history librarian has been busy working with a collection of 34 deeds and indentures dating from the late 18th century to the first quarter of the 19th century. These documents, which record the transfer of land and property in exchange for money or services provided, are connected to Benjamin Sears, who served as sheriff and vendue master (auctioneer) in Ulster, now Orange County from 1793 to his death in 1817. Although Benjamin would eventually establish a farm in Blooming Grove in 1791, he spent most of his time in the nearby Town of Montgomery. These documents were passed from Benjamin to his 9th child Marcus, and then to his grandson Benjamin C. Sears before the farm was sold and the property disbursed in the 1930s. They were eventually donated to the library where they have been preserved and digitized to be shared with researchers from all over the world! So far we have been able to transcribe 18 of these important documents from their original 18th century handwritten script to modern type face so they can be easier to read. You will be able to view these documents for yourself on our library’s digital collections page on New York Heritage here once they have been fully cataloged!

For more information on this and our other historic resources, please contact the library at (845) 496-5483 x 326) or moffat@rcls.org today! 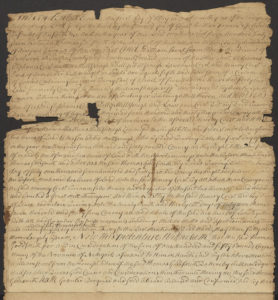 Indenture made on May 7th, 1777 between Thomas Goldsmith and William Sewall Sears. Moffat Library of Washingtonville

Transcript of indenture made on May 7th, 1777 between Thomas Goldsmith and William Sewall Sears. Moffat Library of Washingtonville.