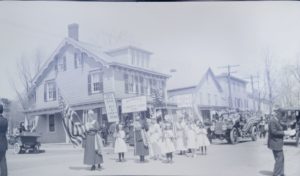 Members of the “Women’s Liberty Loan Committee” march at the intersection of North and Main Street, Washingtonville in a parade to promote the war effort in around 1918. Moffat Library of Washingtonville Local History Collection.

The First World War not only changed the way war was fought, but how marginalized groups saw themselves as active participants. As more men were sent overseas, women were increasingly relied upon as factory workers, farm hands, and civic leaders. By the end of the World War, women in the United States, as well as Britain began to use their influence as wartime workers to promote women’s suffrage.

In addition to groups such as the National American Women’s Suffrage Association, and Washingtonville Women’s Suffrage Club, the women’s suffrage movement would be given additional momentum as a result of  the First World War. During World War One, women served as factory workers, nurses, and organizers of Liberty Loan drives. War work clubs, which collected bandages, and sewed clothing for troops and refugees overseas, provided additional leverage for women to make a case to prove their value in the voting booth. An aide to Carrie Chapmann Catt said to President Woodrow Wilson in July 1917:

“Our hope has been to secure your interest and powerful influence…at the opening of the new Congress for a real drive for the enfranchisement of twenty million of American women, as a ‘war measure’ and to enable our women to throw, more fully and wholeheartedly, their entire energy into work for their country and for humanity, instead of for their own liberty and independence” [1].

Additional pressure from the National Women’s Party, lead by Alice Paul, and Lucy Burns, only increased tension as protesters holding banners that asked “How Long Must Women Wait for Liberty?”  became commonplace outside the White House gates. While addressing a June meeting of the Washingtonville Athenia Club at the Moffat Library, Mrs. John Francis Yawger, President of the New York City Federation of Women’s Clubs stated:

“The funny part is, that the very men who urged the women to stay in their homes and who were ready to deny them the right of suffrage are the very ones telling women to go out and do things“. 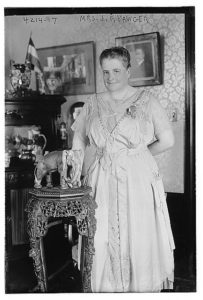 The formation of the Washingtonville Chapter of the American Red Cross was one way in which women helped contribute to the American War effort. The organization was formed in June, 1917 by Eliza Cameron and Mrs. Thomas Fulton. Other members included Ethel and Clara Hudson, whose brother was currently serving. A post-war report of Blooming Grove’s participation in the war states that between 1917 and 1919 the organization had sewn or knitted: “321 pajamas, 133 bed shirts, 874 hand kerchiefs 32 bath robes, 57 surgical shirts, 96 underwear suits, 228 comfort pillows, 36 hospital bags, 12 jackets, 28 comfort bags, 12 infants  shirts, 30 pinafores, 18 boys suits, 32 women’s shirts, 10 petticoats, 12 dresses, 100 hand towels, 50 bath towels, 5 napkins, 1,027 pairs of socks, 530 sweaters, 222 pairs of wristlets, 53 helmets [liners] 167 scarfs, 37 convalescent caps, 22 eye bandages, 22 sponges, 1 water bottle cover” and a total of “82,859 surgical dressings” [2]. As indicated by the variety of materials sent, some were made for soldiers, as well as refugees who had been displaced by nearly five years of war.

The work of these women was not lost on local resident Russell Hallock who wrote in October 1917:

“The women have quit playing cards and all are knitting things for the soldiers.” [3] 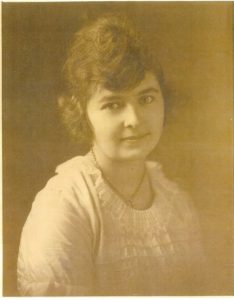 The quantity of items produced by the Washingtonville chapter could not have been produced without the help of other local women’s groups. For example, Mrs. Thomas Fulton, who was in charge of producing and collecting bandages and surgical dressings, began working with the Blooming Grove chapter of the Daughters of the American Revolution. Beginning in June 1917, the Daughters rented out a room in town for one-day a week; which was designated “D.A.R. Day”. During this time, all members were requested to attend in order to produce items for the troops. According to August H. Woodhull, then chapter historian:

“A member of the Blooming Grove Chapter, is director of the surgical work in a neighboring Red Cross Auxiliary, and our oldest member has knitted sixteen sweaters, eight pairs of socks, two caps, and one pair of wristlets between August [1917] and January 1 [1918]” [4].

In addition to sewing articles of clothing, the Blooming Grove Chapter of the D.A.R. also contributed funds for charitable organizations and purchased “Liberty Loans” to support the war effort. During the war, the Blooming Grove Daughters contributed  $13 ($270 in today’s terms) for the French War Orphans Fund, and individually purchased $5,000 worth of Liberty Bonds during the first issue ($104,065.52 in today’s money). The Daughters also sent “Clipping Packets”, packages containing local newspaper articles for the soldiers to read, to the Army and Navy League, as well donated books to soldiers stationed at Camp Mills on Long Island [4] .

At the outbreak of the war, the United States found itself unprepared for the influx of recruits who were joining for overseas service. Many soldiers like David Wright Hudson, had to wait several months to be properly equipped. However, thanks to the help of the American Red Cross in raising funds and organizing clothing drives, the group was able to outfit 38 men with matching clothes, which included: “sweater, helmet, pair of wristlets and three pairs of socks” [4]. The work of the D.A.R., and Athenia Club also helped in providing troops and war refugees with much needed funds and literature to ease their displaced lives, as well as provide much needed entertainment.

More importantly, the work of these women, along with those of local women’s suffrage groups, would help push the fight for women’s suffrage in New York State. On November 6, 1917 Women of New York would finally gain the right to vote. But that is a story for another day!