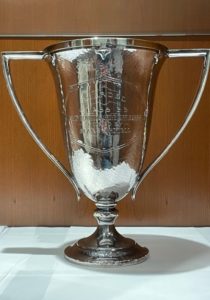 Today’s “Throwback Fursday” highlights this Ayrshire Breeder’s cup trophy awarded to the Blooming Grove farm of Sears & Howell in 1920 by the Ayrshire Breeder’s association. Ayrshire cattle received their name from the County of Ayr in Scotland, where they are said to have originated from. Although the breed had been around since before the 19th century, it became an established breed in 1812. Ayrshires are known to be efficient milk producers, which made them ideal for butter and cheese manufacturing. The Sears & Howell Farm, established in 1791, was known for the production of high-quality milk from their Ayrshires.

The Ayrshire Digest Roll of honor lists cattle from this farm in the Senior Three-Year-Old Class, Junior Three-Year-Old Class, and Senior Two-Year-Old Class for producing milk and fat, as well as produced a calf. The Ayrshire that won this award, the Junior Thre-Year-Old (EE) produced 11,602 pounds of milk, and 484.42 pounds of fat in a 300 day period! The barn, and homestead of the Sears-Howell farm still stands on New York State Route 94 west and is a designated local historic landmark. Learn more about our Local History collection by going here or calling (845) 496-5483 x 326!