As fall turns to winter, we will be highlighting items from our collection that remind us of this festive season! This week we are looking at these ice skates worn by Anna Moffat in the late 19th century. 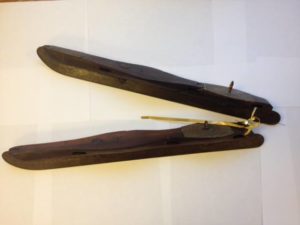 Skating is considered one of the oldest forms of recreational pastimes. One of the oldest pairs of skates was discovered in Northern Europe and are dated to be over 4,000 years old! Even the terminology used dates to the dark ages, and early-medieval period as the word “skate” is itself derived from the Old English word Schake, meaning leg or shank.

Early skates were made from elk, reindeer and oxen bone and lashed to the wearer’s boots via leather or twine. By the 19th century, ice skates were more refined and consisted of a steel blade mounted to a wood board. These skates have a screw in the heel so they can be mounted to a boot or shoe before being secured with a strap. With practice, skates such as these allowed the wearer to carve intricate patterns, in the ice, leading to elaborate “ice writing” competitions, the forerunner of modern figure skating. 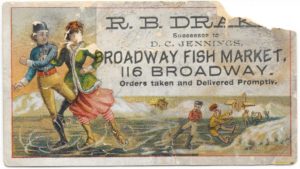 During the winter, locals took full advantage of frozen rivers, like the Hudson, creeks, such as the Moodna, and even local farmer’s ponds for winter entertainment. In 1866, historian Benson Lossing recorded “Even in winter…Newburgh Bay presents a lively scene almost every day, for ice boats and skaters are there in great abundance”. Writing of his experiences fifty years later, E.J. McLaughlin III noted “when frozen over [the Moodna Creek] provided a good mile of ice skating and many impromptu hockey games”.

Posted in Local History, What We Do, What's New