It’s that time of the year where we raise a glass to usher out the old year and welcome in a new one! For “Throwback Thursday” this week, we are highlighting this advertisement for Brotherhood Champagne by Hausermann Litho, N.Y. & Chicago. 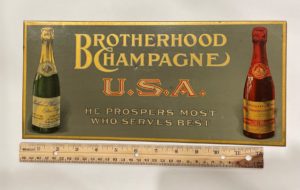 By the early 20th century, the small operation started by Jean Jaques at his store on the corner of Main, and North Streets in Washingtonville in 1835  was producing 250,000 bottles of champagne, with 1,500,000 bottles held in storage. At this time the company was owned by the Emerson family, who purchased the winery from Charles Jaques in 1886. Jesse Emerson, and his sons Edward and Jesse Jr.,  were responsible for the company’s expansion in products and capital well into the 20th century.

At the time this advertisement was produced, Brotherhood had won the Grand Prize for wine and champagne at 1904 St. Louis Exposition, ranking it above other established wineries in the eyes of an international jury. Despite this prestigious award, production halted on Brotherhood’s champagne between 1920 and 1933 as a result of prohibition. However this pause had an unintended, and delicious outcome!

Following the passage of the 21st Amendment on December 5, 1933,  Brotherhood was able to make available over 500,000 bottles of “new vintage” champagne for sale. Bottled between 1915 and 1918, these bottles were inadvertently left to age for nearly 15 years. The champagne created a boost of publicity for the company. Its new owner, Louis J. Farrell, was dubbed “The King of Champagne” for maintaining this large stockpile for over a decade while ensuring its quality met the high standards of the company.

To learn more about Brotherhood Winery, stop by the library to pick up a copy of The Story of Brotherhood, America’s Oldest Winery by Robert Bedford, printed by Flint Mine Press, or visit the winery, located two miles east of our library, today!