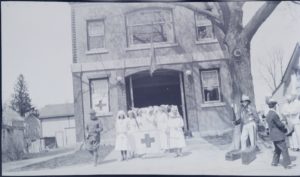 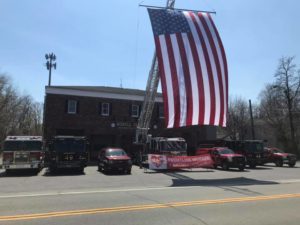 Since the beginning of March, our community has seen increasing support for essential workers and hospital staff as a result of the ongoing Coronavirus (COVID-19) pandemic that has affected communities large and small throughout the world. Businesses bedecked with signs showing support, as well as guidelines for those affected by this disease bring to mind images of another global event that impacted our community over one-hundred years ago.

On April 6, 1917, the world as Americans knew it would change forever. On this date, one-hundred and three years ago, the United States declared war on Germany, formally marking America’s entry into the First World War (1914-1918). To those living through the war, it was considered one of the first “Great man-made catastrophes of the twentieth century”.  The world as people knew it in June 1914 was a very different one in April 1917, and by November 1918, it was completely unrecognizable. Monarchs were deposed, national boundaries were redrawn, and individuals found themselves in the center of social and political movements . The war would have a profound effect on the people of Washingtonville and Blooming Grove. Over 100 men and women from the area served overseas, and many more volunteered their time to support the war on the home front. Three local servicemen would never return, and are memorialized on the Village’s World War One monument, erected shortly after hostilities had ceased. Women stepped into the national spotlight, and were asked to “Do their bit”. Many joined the Washingtonville chapter of the American Red Cross, while others raised funds, and knitted items for soldiers and refugees. African Americans saw their opportunity to prove themselves worthy of being treated as equals, and 10 of them from Blooming Grove and Salisbury Mills would serve their country overseas.

The Moffat Library’s collection of World War One materials documents the stories of these ordinary lives that were swept up in extraordinary times. Originally published on our former local history blog “Stories from the Vault”, we are republishing this series of articles here to show how our community responded to this global conflict.