In recognition of Saint Patrick’s Day, a holiday associated with Ireland, and has become a celebration of Irish heritage and history for many, we thought it would be appropriate to share a few items from our digital collections page on New York Heritage that are linked to two stories of trans-atlantic migration from Ireland to the United States in the early 19th century.

Following revolutions in both America and France, in the last quarter of the 18th century, a group of Irish political revolutionaries led by Theobald Wolfe Tone, Thomas Russell, and James Napper Tandy organized the Society of United Irishmen in 1791. This political group sought to achieve emancipation for Roman Catholics with the help of Protestant and Presbyterian Irishmen who were seeking universal male suffrage, and the removal of British rule in Ireland. Attempts to form an alliance with Revolutionary France however led to mixed results, and the British government’s actions in suppressing this movement by confiscating arms, ceasing the publication of radical publications, and arresting local leaders only hastened the outbreak of open rebellion. The regions of Eastern Ulster and Wexford saw a majority of skirmishes, raids and battles, culminating in the Battle of Vinegar Hill on June 21, 1798. During this battle, 13,000 British troops successfully defeated between 16 and 20,000 United Irishmen. This battle led to the numerous atrocities against the United Irishmen, their families and  supporters, with many fleeing to France or North America. 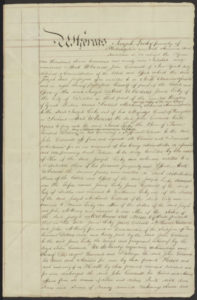 Settlement of affairs between James Lecky and John Caldwell regarding the payment of debt, signed July 15, 1811, Moffat Library of Washingtonville

Although we aren’t certain that Joseph Lecky, was a member of the United Irishmen, we do know that he is connected to John Caldwell, who was a member of the United Irishmen and fled to the United States with his family following the confiscation and destruction of his estate “Harmony Hill”, in County Antrim. The Settlement of Affairs between James Lecky and John Caldwell from the library’s Sears Family Collection, seen here, shows us the connections maintained, and routes traveled among Irish people following the failure of the 1798 rebellion. According to this document, Joseph immigrated from Ireland to the United States sometime in the last quarter of the 18th century. From Philadelphia he decided to acquire land in Kentucky, then a relatively new, and sparsely populated state. Lecky may have been one of the many “Scotch-Irish”, or Irish Presbyterians, looking to establish themselves in the western frontier of the newly formed United States. We also know that the Leckys and Caldwells intermarried, Joseph’s sisters Maria and Catherine married Nathaniel, and James Caldwell respectively, and they were living in Dublin, Ireland at this time.

The Caldwells also feature prominently in another document in our digital history collections page on New York Heritage. The outbreak of the War of 1812 between the United States and Great Britain on June 18, 1812 was the first time since the 1798 Rebellion that Irishmen who wanted to be independent of Great Britain saw an opportunity to settle old scores. One month earlier on May 12, 1812, Lieutenant Colonel John Chrystie ordered John Caldwell’s son Richard, a Captain in the 25th U.S. Infantry, to begin recruiting in the Blooming Grove area for an 18th month term of service. You can read this letter in its complete and transcribed form here! 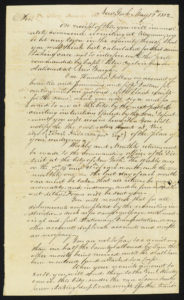 John Chrystie to Richard Caldwell May 12, 1812. Moffat Library of Washingtonville

This conflict, fueled by anger over the impressment of U.S. sailors by the British Navy, and the desire of the United States to expand into British territories in Canada and the midwest, also pitted Irishmen against Irishmen, who served on both sides. However Captain Richard Caldwell would never see action, dying at Pike’s Cantonment, a winter encampment, located in Plattsburgh, New York in the late fall of 1812. Reports of his death state that he died of pneumonia after handing out articles of his clothing to his men, who were insufficiently clothed for the harsh winter conditions. For his part, John Chyrstie, the author of this letter, would command U.S. forces under Stephen Van Renselaer at the Battle of Queenston Heights, in present day Ontario, Canada, fought on October 13, 1812, and was later blamed for the American defeat after the boats carrying his troops across the Niagara River failed to return, leaving the American stranded on the Canadian shores. He would die of natural causes after being promoted to Colonel nearly  one year later. Although Chrystie Street in lower-Manhattan is named after him, Richard Caldwell is remembered in the form of a memorial to local soldiers who served in the War of 1812, and American Civil War located on Orrs Mills Road, near his former home, now the Caldwell House Bed & Breakfast, in Salisbury Mills, New York.

If you want to learn more about the History of Ireland, or the role of Irish immigrants in the early decades of the United States, feel free to check out our history collections at the library and online!