Summer is quickly approaching and with that the whir of lawnmowers, weedwackers and other yard equipment. However you would be hearing a completely different noise if you lived in Blooming Grove 100 years ago. This week we are highlighting this advertisement for a horse-powered threshing machine as sold by Samson L. Moffat (d.1929) from 1888.

Although horsepower, the unit used to measure the rate at which work is done, is associated with devices powered by gas and steam, its origin dates to the late 18th century, when Scottish engineer James Watt conducted experiments comparing the work output of draft horses to early steam engines. Watt was able to determine one horsepower equals 33,000 foot-pounds of work per minute, or half the equivalent of what a draft horse can perform in a working day. This information was important for measuring the efficiency of pumps, mills, and other industrial machines being used at the beginning of what is known as “The Industrial Revolution”.

In addition to being used as a unit of measure, horses literally powered many agricultural tools used on farms in the 19th century. Threshers were designed to loosen grain from the straw, which was the first step of turning grain into flour. Before the invention of horse-powered threshers, this work was done manually using flails, a rod with a swinging pole at one end. The device advertised by Samson L. Moffat shows two horses on an enclosed treadmill. The treadmill is at an incline, which means that the horse’s weight will force it to move uphill continuously once the brake is released. The treadmill powers a wheel which is connected to the threshing device via a belt drive. As straw is fed through one end, it enters a device that softens the stalk and removes the wheat. Once the bag became full, the brake was placed on the treadmill and the horses were able to rest. The end product is collected via a canvas bag where it was taken to be “winnowed”; having the grain removed from the chaff. 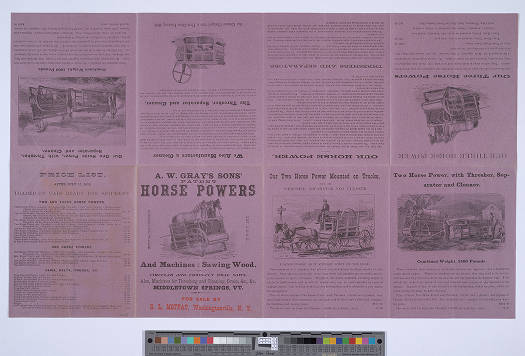 The Vermont firm of A.W. Gray’s Sons was a well-known producer of horse-powered machines in the late 19th century. Their two horse powered Thresher, Separator and Cleaner being described in their literature as:

“so universally known and approved that a description seems almost useless. Where our machines are not known, they only need to be once introduced and they will soon show that they are just the machines the farmers want”.

Samson L. Moffat was married to Harriet Brewster Moffat (1842-1929), and owned a 172 acre farm with their son Warren. The farm was located between Moffat Road and the Erie Rail line on the northern border of the Town of Blooming Grove and was made up of two undivided parcels of property on which was an “improved dwelling house, two very small tenant houses, an old carriage house, an ice house, a cattle and hay barn, a granary and two or three sheds erected thereon”. These properties were originally deeded to Henry F. Moffat from Schuyler Goldsmith in February 1837, and Joseph Moffat in June that same year. Following Samson’s death in December 1929, the property was divided among his three children: Warren (1867-1937) Henry (b. 1875) , and Anna (1869-1956). The farm is now a private residence.