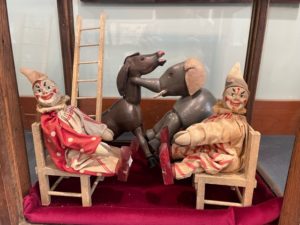 This week we are highlighting these early 20th century clown dolls from the Hudson Family collection. Known as “Schoenhut dolls”, these fully articulated figures were produced by Albert Schoenhut & Company sometime around 1900. 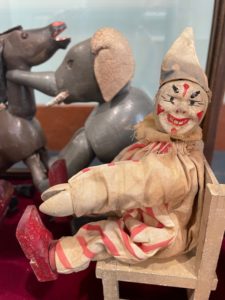 In 1866, woodcarver Albert Schoenhut was invited to America from Wurtemberg Germany to repair toy pianos for the Wanamaker Department Store, located in Philadelphia. Six years later Schoenhut opened his own toy company on Frankford Street, specializing in toy pianos and musical instruments. As his reputation, and array of toys, grew so did Albert’s company. By 1901 Schoenhut’s company had moved to a larger building, off present-day Hagert Street in Philadelphia, and had 125 workers. It was around this time that these dolls, known as the “Humpty Dumpty Circus Set” began to appear in store windows and catalogs.

Circuses were an established and popular form of entertainment in the United States at the turn of the century, so a doll set focused on acrobats, clowns, and exotic animals was a natural selling point! It also kept customers wanting more as the buyer would need additional sets to complete the series, which included a ringmaster, band, tent, animals and performers, all sold separately. In addition to the intricately detailed costumes of the performers, the early circus sets included animals with glass eyes and real hair! 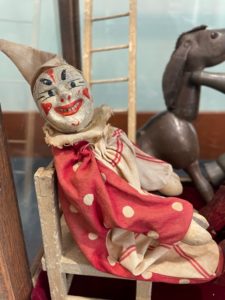 Albert Schoenhut passed away in 1912, but the company continued under his six sons, who continued to produce a variety of dolls including baby dolls, walking dolls, “sleepy eyes” dolls, dolls based on popular comic strip characters, and even a doll of Theodore Roosevelt. The company continued to produce toys through the Great Depression of 1929, but was unable to recover its losses and the company filed for bankruptcy in 1935. However that wasn’t the last act of these circus clowns!

In 1950, fifteen years after the last Schoenhut “Humpty Dumpty Circus” sets were produced, Nelson B. Delavan, a toymaker from Seneca Falls, New York, was granted permission by one of Albert Schoenhut’s sons, Otto, to reproduce the sets under the “Humpty Dumpty” title, which he did until ceasing production in 1952. Despite this, we believe the circus dolls in our collection are the original ones produced by Albert Schoenhut’s company between 1901 and 1935. As for their owner, we believe these dolls were owned by Clara Hudson, an avid collector and enthusiast who displayed many of her creations at the Moffat Library. 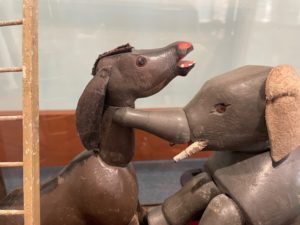