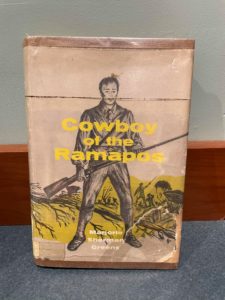 Copy of “Cowboy of the Ramapos” by Marjorie Sherman Greene (1956). Moffat Library of Washingtonville.

This month we are looking at the strange, unusual, and legendary every “Throwback Thursday” in October! This week we are highlighting this 1956 copy of Cowboy of the Ramapos by Marjorie Sherman Greene. In this work of historical fiction, main character Geoffrey Blackburn, a scout for George Washington’s army, must find the hideout of Claudius Smith, the leader of a band of Loyalist outlaws known as the “Cowboys”. Although this is a work of fiction, Claudius Smith, and his Cowboys really did exist!

Claudius was born on Long Island in 1736, but settled in present day Monroe New York in 1741. In 1762 he enlisted in Colonel James Clinton’s Company of Ulster County Militia and served in the French and Indian War. Following the end of hostilities in 1763, he made a name for himself as a criminal and was imprisoned for “debt, theft, and rioting”. During the American Revolutionary War, both Blooming Grove, and Monroe were on the periphery of a conflict that engulfed the thirteen rebelling colonies. Many individuals took advantage of the fractious nature of this war to settle old scores and take advantage of others who they disliked prior to the opening of hostilities on April 19, 1775. Those who supported the cause of independence were known as “Patriots”, and those who adhered to the authority of Great Britain were known as “Loyalists”, but the degree and motivation of an individual to adhere to one principal to another varied greatly, especially when state sponsored bounties were placed on the heads of officials and local community leaders.

Claudius and his two sons Richard and James remained loyal to the crown, while his other son sided with the Revolutionaries. Despite his allegiance, Claudius socialized with the Brewster and Gale families, the Brewsters being adherents to the Patriot cause. On October 6, 1778 when Smith and his gang robbed Ebenezer Woodhull’s property and murdered Major Nathaniel Strong, who is buried in Washingtonville Cemetery. A description of the event was recorded following a coroner’s interview with Ebenezer’s wife Abigail:

A coroner’s report for October 8th: “Mrs. Woodhull being duly sworn saith that on the night of the sixt of this instant, Claudius Smith and a party of armed men came to hur [sic] house about twelve O clock, and did rob hur [sic] and wish hur [sic] Husband was at home for he would have him ded [sic] or a live.”

Nathaniel Strong’s wife recounted “about One O Clock she heerd [sic] sum [sic] men knocking at the dore [sic] and braken [sic] the windows, on which hur [sic] husband got up and askt [sic] who was there; they answered a friend; on which they ordered him to lay down his arms and open the dore and they would not hurt him; he answered he would if he could; they told him to lay down his gun; he said he had; on which he stept forred [sic] and was shot by the party that had attackted [sic] the house and further she heared hur [sic] husband say it was Claudious Smith”

A reward for $1,200 for Claudius and $600 for his sons and John McArthur as well as $300 George Davis and Nathaniel Biggs was ascribed by the state legislature. Despite pleas of help from New York Governor George Clinton, Claudius and his gang continued raiding and harassing prominent leaders who identified as Patriots, including the home of Robert Erskine on November 11, 1778. Smith was eventually captured by Major Jesse Brush while hiding on Long Island, then occupied by the British, and executed January 22nd, 1779. His son Richard continued as gang leader until fellow members William Cole, and William Welcher confessed their crimes to authorities, as the war was winding down and it became clear they would be on the losing side. This resulted in the outing of those who harbored the gang and thus undoing their support network.

There are many stories that revolve around Claudius Smith, but perhaps the most unusual, and gruesome is the story that Claudius Smith’s head skull was embedded in the masonry of the 1841 Goshen Courthouse. This incident is the subject of a Legends & Lore marker, which was dedicated on October 30th, 2016. On May 1st, 2021, a related marker was unveiled at Washingtonville Cemetery, noting it as the final resting place of Major Nathaniel Strong.

Dewey, Charles. “Terror in the Ramapos” Journal of the American Revolution, March 25, 2019.
https://allthingsliberty.com/2019/03/terror-in-the-ramapos/