Remember having gelatin salad for dinner growing up? Do you want to relive the experience, or better yet, share it with your guests? This week we serve up not one, not two, but three recipes for salads with extra jiggle courtesy of Kitchen Loves Cook Book!, compiled by members of the Sarah Wells Garden Club in 1976.

A cranberry jello salad made in a ring mold. Wikimedia Commons, 2007. 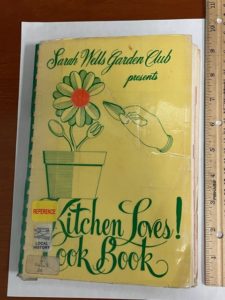 The Sarah Wells Garden Club was founded in 1971 and was named after Sarah Wells, the first European settler in what is now the towns of Campbell Hall, and Blooming Grove, New York. According to the introduction to Kitchen Loves Cookbook, their meetings included “programs and workshops on the advancement of gardening; the development of home grounds; the stimulation of cooperative gardening; and aid in the preservation of forests, plants and wildlife”. Although the club is no longer in existence, the mission of this group carries on through organizations such as the Master Gardeners of Orange County, Friends of Orange County Arboretum, and other local garden clubs.

Considered by critics as one of the most recognizable, and popular dessert products in American cuisine, Jell-O was invented in 1897 by Pearl B. Wait, who improved the concept of powdered gelatin, invented fifty years earlier, by adding fruit flavoring to the recipe. Francis Woodward bought the patent from Wait in 1899 for $450, or $11,000.00 in today’s money, and began production through the Genesee Pure Food Company, located in LeRoy, New York. More than just a tasty treat, Jell-O democratized gelatin desserts, taking an otherwise labor-intensive dish served only to those who could afford it, and making it convenient enough to make in a working class home.

This is partly the reason for the popularity of jellied salads in the first half of the 20th century. It was convenient, not messy, and economical, perfect for a household on the go! With the Great Depression of 1929, Americans had to use what resources they had in order to make sure their families were fed. The post-war years also saw an explosion of gelatin salads as women began to balance domestic roles with work outside of the home. According to food writer Sarah Grey, women “added labor back into the process…instead of cooking from scratch, they used prepared foods, but “doctored them up” with additional ingredients or dramatic presentations that made it clear the’d spent real time and effort on the meal” This was all in an effort to put “love and care” back into prepared foods, whether they were needed or not. By the 1980s, however, the women’s movement saw a larger number of women with careers and as heads of households. The variety of pre-packaged foods, along with dieting and nutrition trends that shunned gelatin for tossed salads made these recipes below a thing of the past.We’re not sure how these recipes tasted, but we agree that the experience was a memorable one regardless. 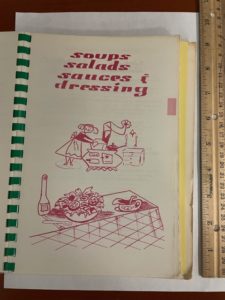 
1 pint half and half
1 onion
1 green pepper

Warm light cream or half and half; dissolve gelatin in it.
Cool; add salt, vegetables ground or finely chopped.
Put in mold: 1 large or 2 medium sized.
Preparation ½ hour. Serves 8. Will keep several days in refrigerator. Serve with mayonnaise mixed with sour cream.

Serves 6.
Wonderful for a buffet.
Easy to do the day before, takes about 15 minutes

Dissolve gelatin in 1 cup boiling water; add salad dressing (have it at room temperature). When cool add cheese and vegetables. Turn into a 4 cup mold. Chill until set.
To serve, cut into squares or invert mold onto serving platter and garnish with greens, olives or other vegetable decorations.

Beat together and add to jello, mixing, beating until smooth.
Add: