Diplomatic relations between the United States and Germany had eroded since the first shots of the war were fired two-and a half years earlier. At the outbreak of war in August, 1914, the United States had a burgeoning population of immigrants, many of whom had arrived from the nations who were currently at war. Blooming Grove’s 1910 census included the family of John and Christine Winters, who immigrated from Germany, Joseph Romer from Poland, and John Pointek from Russia. Other foreign-born citizens included Harry McComb from Ireland, and his Swedish wife Christina, along with other immigrants from Switzerland, the Netherlands, and Great Britain [1]. The sinking of the Lusitania by a German U-Boat in May 1915, which killed 1,198 passengers; including 128 U.S. citizens, led many Americans to volunteer for overseas service with either the Canadian, British, or French military [2]. Salisbury Mills resident Stirling Alexander Findlay enlisted in Company A. 107th Regiment of the Canadian Expeditionary Force in August, 1915 and would serve in the battles of Vimy Ridge, April 1917, Hill 90, August 1917, and Arras, September 1918 before returning home in 1919 [1] [3]. By January 1917, Germany’s declaration of the use of unrestricted submarine warfare, targeting neutral ships that delivered food and supplies to allied ports in Britain and France, as well as the discovery of the Zimmerman Telegram, a message sent by the German foreign office proposing an alliance with Mexico and Japan should the United States declare war, led to President Woodrow Wilson severing diplomatic ties with Germany and officially entering the war on the side of the allies on April 6th, 1917 [2].

Propaganda played a key role in motivating Americans to enlist and support the war effort.  President Wilson, who until recently campaigned as a president who sought resolution through peace and diplomacy, had to convince the American public that her entry into a war, that had already killed and maimed millions of lives, was just [6]. The work of the Committee on Public Information, rallies, and propaganda films would all play an important role in defining America’s role on the global stage.

One week after war was declared on April 13th, President Wilson authorized the creation of the Committee on Public Information (or CPI) [4]. This organization was charged with publishing pamphlets, flyers, and advertisements that promoted the “rightness” of America’s involvement in the war using descriptions of war atrocities, and exaggerated images of German soldiers murdering innocent women and children [5]. A graphic example of war propaganda carried by a local Washingtonville soldier, David Hudson, shows a German soldier kidnapping two children (representing the former French territories of Alsace and Lorraine). The menacing soldier carries a butcher’s knife in his belt, and his jacket is stained with a bloody hand print. The illustration comes from the 1918 publication of Whitney Warren’s “Alsace-Lorraine, A Question of Right”. In this publication, the author attempts to justify why the territories of Alsace and Lorraine should be returned to France after being annexed by Germany following the Franco-Prussian War of 1870-1871:

‘ “Alsace [Germans say] is a country essentially German, by its population, by its geographical situation, by the language which is spoken. It is by violence that she was torn from Germany in the seventeenth century, and the Treaty of Frankfort in 1871 only gave back to the German Fatherland what belonged to it…Alsace and Lorraine were not treated as a recovered province, but as a colony which it was necessary to Germanize…The future peace of the world, of America itself, will not be assured, if the war ends, otherwise than by the return to their cradles, of all the peoples who have been robbed from their mother countries, and the integral restitution of all the thefts committed by Germany and Austria in the last century…” ‘ [6] 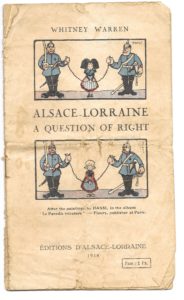 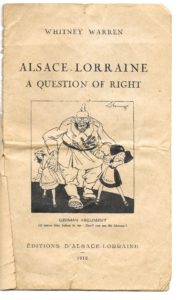 The Blooming Grove Congregational Church also helped promote the war effort in the area. A July 1918 “Religious, Patriotic, and Social” program brochure highlighted services titled “Our Re-Christianized Democracy” and “Our Re-Challenged Democracy”, in addition to youth programs such as “The Industrial Democracy” and “The Youth of Democracy”. Special guests, such as the former U.S. ambassador to Germany, James W. Gerard, were also invited to speak to congregants.  In his 1917 book detailing his time as a diplomat to Germany from 1914-1917, he states that:

“We are in this war because we were forced into it: because Germany not only murdered our citizens on the high seas, but also filled our country with spies and sought to incite our people to civil war.” [7]

Gerard’s book was an instant best seller, and in 1918 turned into the first movie produced by Harry, Sam, Albert, and Jack Warner; the founders of Warner Brothers studios. 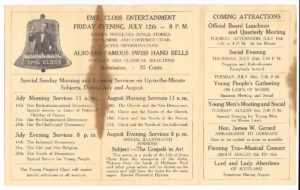 By 1917, motion pictures had increased in popularity and complexity. Film makers such as D.W. Griffith, William Nigh, and Allen Holubar used this new form of mass media to produce propaganda films. One such film was “The Heart of Humanity” , produced by Carl Laemmie, and starring early film stars Dorothy Phillips, Willam Stowell, and Erich Von Stroheim. Loosely based on D.W. Griffith’s film “Hearts of the World”, the film follows the story of an American girl; Nanette, who volunteers as a Red Cross nurse after her love, John Patricia, enlists in the Canadian army. While there she confronts the evil German officer, Lieutenant von Eberhard, and must be rescued by her love. One of the more climactic scenes from the film is when Nanette attempts to save a baby from German soldiers led Lieutenant von Eberhard as the building she is hiding in burns around her. The film debuted at New York’s Broadway Theater on December 22nd 1918 to mixed reviews by the New York Times: “The Heart of Humanity” is presented with a realism which is sure to make an impression of approval or disapproval…Children add to the charm and effectiveness of some of the scenes, and their costumes and acting reveal that intelligence and care in direction elsewhere evident in the production. One receives the impression, however, that the making of a few of the scenes in which the children appear was not very good for the children” [8]. In 1919, Washingtonville resident Susan Hudson Wright described the film in a letter to her cousin David Hudson, who was currently serving as a Sergeant in the 6th U.S. Infantry overseas:

“Last Tuesday I went to the movies and saw “The Heart of Humanity”. It was a war picture based on the truth and it was very sad. I have been to the movies quite frequently and I am afraid I am getting the movie decease [sic].” [9] 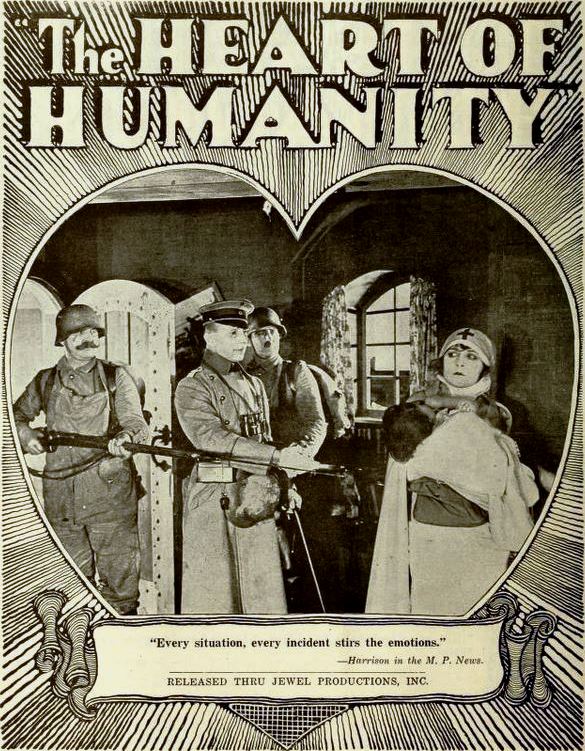 Propaganda in the form of pamphlets, programs, and motion pictures had an effect on the citizens of Blooming Grove and the United States in general. They promoted a shared sense of patriotic duty, and defined the role of the United States in a global war many citizens barely understood. At the same time, the CPI and other propaganda outlets also silenced dissent among activists and organizations that questioned America’s involvement, and unintentionally led to the persecution of German-American citizens.  Still, by looking at these documents in the library’s local history collection, one can put themselves in the mindset of David Hudson, Sue Hudson Wright, or many of Blooming Grove’s other citizens who saw the First World War as a moral calling to defend America’s democratic principles abroad, and encouraging every citizen to do their part to win “The War to End All Wars” [5].