The Orange County Citizen’s Foundation has awarded the Moffat Library of Washingtonville a 2018 Placemaking Award for the historic “Restore, Renew and Reimagine” Moffat Library Renovation and Expansion Project.

The Award recognizes individuals, organizations, projects, and festivals that have contributed to the creation or transformation of public "places" to improve the local community, and have exemplified placemaking concepts and practices.

The Orange County Citizen’s Foundation has awarded the Moffat Library of Washingtonville a 2018 Placemaking Award for the historic “Restore, Renew and Reimagine” Moffat Library Renovation and Expansion Project. The Award recognizes individuals, organizations, projects, and festivals that have contributed to the creation or transformation of public "places" to improve the local community, and have exemplified placemaking concepts and practices.
The Awards Ceremony will take place at the 10th Annual Placemaking Conference and Awards on Friday, June 15, 2018.

After Hurricane Irene hit in 2011, the historic landmark Moffat Library of Washingtonville building was left uninhabitable and the Board of Trustees needed to quickly find alternate accommodations in order to continue service to the community. James Smith, the owner of Advance Testing in Campbell Hall, New York, came to the Library’s rescue and offered to temporarily house the library for the community. Once the building was turned over to the Library in 2013, the library staff, Board of Trustees and the newly-created building committee immediately got to work.

The Library conducted a major survey to discover the needs and wants of community members in order to start creating a plan to return the library to its building in the center of the village. From the survey results and information gathered at community meetings, as well as from Library staff, trustees, Friends and community members, a building plan was developed to meet the growing needs of the Washingtonville/Blooming Grove community into the 21st century. Once that plan was in place, the architectural firm of Butler Rowland Mays was engaged and created a building design that strove to incorporate the community’s needs and the features of a 21st century library, while maintaining the historic character of the original historic landmark building, and all within the confines of a fiscally-responsible budget that the public could support. The plan was then presented to community groups and organizations to show the benefits of the project. A $6.9 million bond reference was set and passed by the community in March of 2015 and the final plans were drawn up. After a well-attended Groundbreaking Ceremony on April 6, 2016, the project began the construction the following month.

A New York State Division of Library Development Library Construction grant was awarded in 2014 and went towards the demolition of two adjacent buildings and site preparation for the library’s new expanded parking lot. In 2015, the library received another NYS construction grant towards the HVAC mechanical system for the building. In addition, the Library is set to receive a NYS grant from Senator William Larkin towards the fire sprinkler system, as well as a grant from Assemblyman James Skoufis towards a generator. Lastly, a 2017 NYS construction grant has been submitted to renovate the historic Carriage House that sits on the grounds of the library. These grants were made possible by New York State Senator William J. Larkin and New York State Assemblyman James Skoufis, who have supported the project throughout.

The Orange County Citizen’s Foundation believes that Placemaking strengthens the connection between people and the places they share and encourages residents of Orange County to engage in placemaking initiatives to shape a meaningful and sustainable future for subsequent generations. The Moffat Library “Restore, Renew and Reimagine” project has made that dream into a reality for its community now and for the future. The grand re-opening took place on September 16, 2017 and the community has been enjoying its “new” library ever since.

For more information and photos of the project, go to: moffatlibrary.org / ABOUT US / Historic Building Project 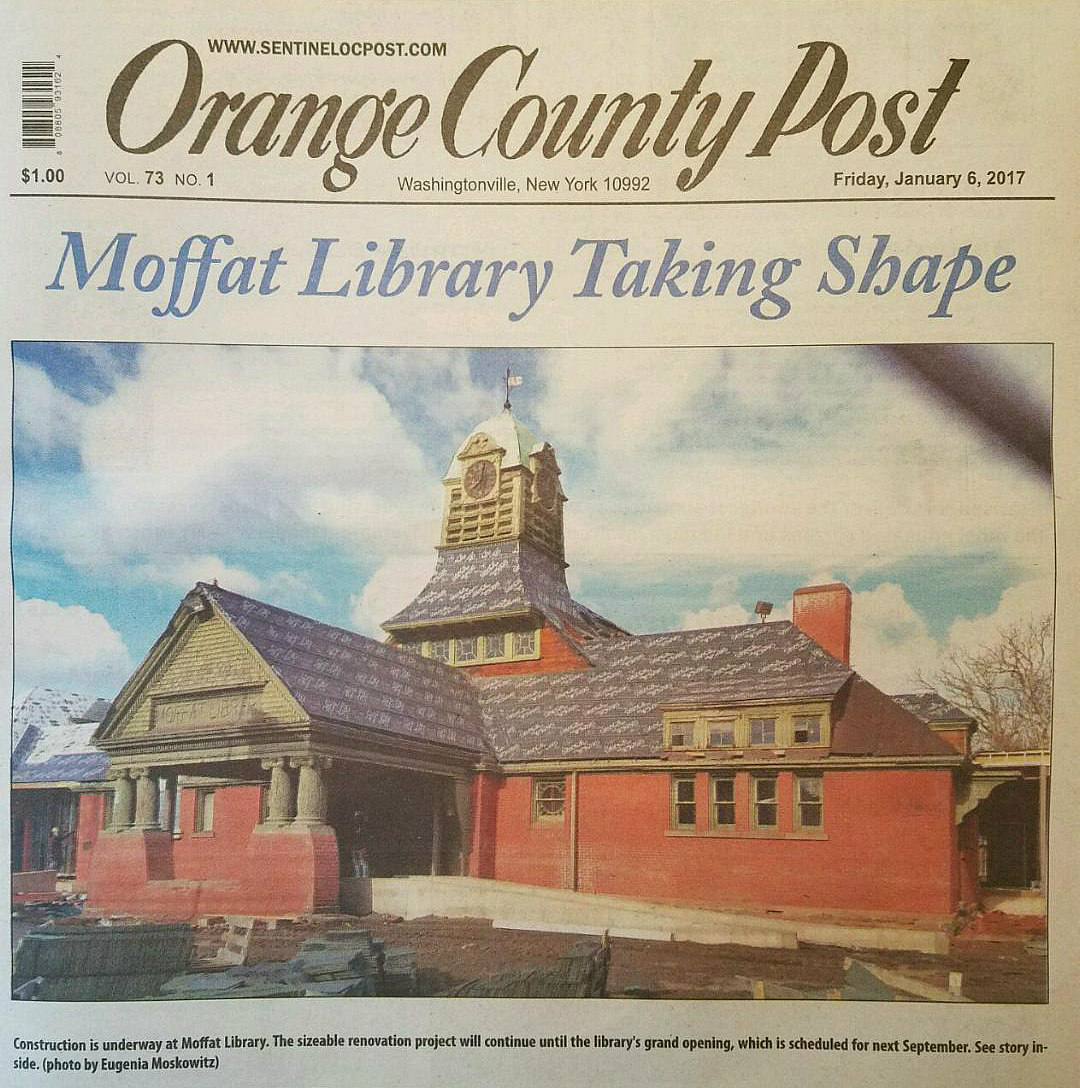 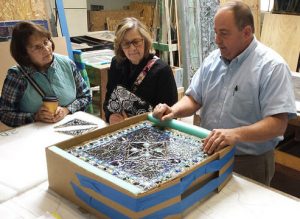 Much has happened since our groundbreaking ceremony on April 6th.  As is evident to everyone driving into the heart of Washingtonville, our new Library is taking shape.  The concrete has been poured for the new addition sections and the steel is in place as well. The concrete flooring and ramps for the reading porch are also finished.  Windows are being installed and our Tiffany & Belcher windows are undergoing restoration.

The envelope of the building should be completed by the end of December so that they can continue work throughout the winter on the interior.  The slate on the roof should be in place before the winter snows come.  This will be an exciting event since it will again show our building as it was in all its 1887 glory.  The original slate roof was removed and replaced with an asbestos roof tile during a 1950’s renovation.  Now the beautiful and sturdier slate will again grace our building.

The building committee and the library staff are now concentrating on choices for furniture, shelving, decorating ideas, and carpeting.  Our technology consultant is working with the architects and library staff on the development of a plan for the infrastructure needed for the latest equipment.  We will truly have a library equipped for the 21st century!

The excitement generated by our progress is palpable.  An events committee is already working on the ways we will be celebrating the grand re-opening of our fabulous Moffat Library.  We expect events to begin in the spring and continue throughout the summer culminating in a grand opening in September 2017.  Look for announcements of events and ways you can help and participate!

-The Board of Trustees of Moffat Library of Washingtonville 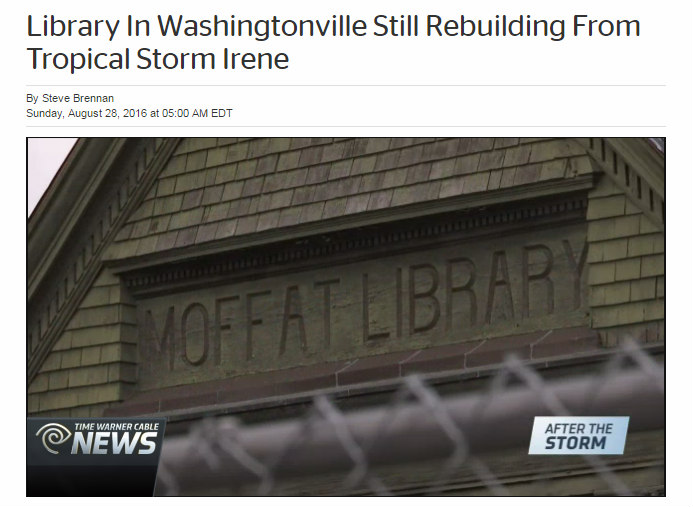 This chronological photo documentary begins with the devastation left from the 2011 Hurricane Irene flood that left the building unusable, on to the demolition of the adjacent buildings to make way for a larger library parking lot, to the April, 2016 Groundbreaking Ceremony and on the subsequent removal of old tile from the library roof and demolition of the extensively-damaged additions to the buildings.

Be sure to periodically check in to keep abreast of a visual story of the beloved Moffat Library building! Updates coming soon! 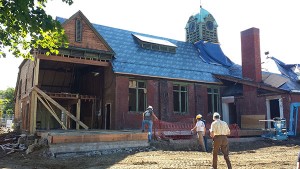 The community of Washingtonville, New York celebrated the start of a building process to “Restore, Renew and Reimagine” the Moffat Library of Washingtonville on Wednesday, April 6th with an official groundbreaking ceremony at the library.

Rendered uninhabitable by flooding during Hurricane Irene in 2011, and turned over to the Moffat Library Board of Trustees by the Town of Blooming Grove in 2013, the Board secured the services of Butler Roland Mays Architects to work with the Board and staff to develop a building plan to present to the Washingtonville community.  A successful Washingtonville School District Referendum vote in March, 2015 to secure a $6.92 million bond to restore and enlarge the library building passed with overwhelming support from the community.

Designated as a historic landmark and placed on the National Register in 1994, the Moffat Library was designed by architect George Edward Harney in the Queen Anne style in 1887.  The library’s landmark tower features an original Howard clock and the roof of the formal entrance is supported by elaborately scrolled Greek columns. The renovation plan will preserve these and other 19th century historical elements, while incorporating 21st century technology and design.

The renovation, redesign and expansion of the building will feature an open-floor plan, the newest technologies and cost-efficient heating and cooling systems, in a park-like, landscaped setting that will “revitalize the Village of Washingtonville’s downtown,” said David Heintz, Mayor of Washingtonville, at the library’s long-awaited groundbreaking.

Everyone is eager to return to our beautiful historic Moffat Library building in the center of Washingtonville.  In 2013 The Library Board of Trustees formed a special building committee to work on this project.  The committee includes library trustees, the library director, and members of the community.

To show our progress, listed here are the steps taken to reach the goal of returning to the Moffat Library building and what we expect to happen in the near future.

Click here for our timeline to restore, renew & reimagine the Moffat Library.

The space created will provide for a new parking lot to accommodate approximately 25-30 vehicles, as well as a small addition for the newly Restored, Renewed and Re-Imagined Moffat Library.