This week we are observing Juneteenth on our blog this Throwback Thursday by highlighting a recent donation potentially connected to a local resident to our library’s Local History Collection that tells the story of African Americans actors and artists and their triumphs and challenges of advancing their careers and profession in a segregated United States in the 1930s. 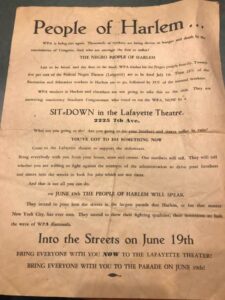 Although states abolished slavery at different times leading up to, and following the American Civil War (1861-1865), Juneteenth commemorates the day that federal troops arrived in Galveston, Texas to announce the official abolition of slavery on June 19th, 1865. Many states have their own “Emancipation Days” but Juneteenth has been recognized and celebrated by African Americans throughout the United States since the first official celebrations were held on June 19, 1866. Despite this, June 19th only became a state holiday in Texas in 1980 and eventually a federal holiday in 2021.

This flyer for a “Sit-Down” protest from members of the Harlem chapter of the “Negro Theater Project” (NTP) does not explicitly mention the Juneteenth holiday. However, the significance of the date in relation to the activities of this group of civil rights pioneers was probably not lost on them or those who supported their efforts. Since the end of the American Civil War, African Americans throughout the United States lived in a segregated society, where they were barred by law and racial prejudice from receiving the same privileges and advantages of their white counterparts. This was exacerbated more when the stock market crashed in 1929 ushering in the Great Depression, a period which saw massive unemployment for many Americans across racial, social and economic backgrounds.

President Franklin D. Roosevelt hoped to alleviate unemployment and poverty through his slate of “New Deal” programs, which aimed to use the power of the federal government to increase wages and provide employment opportunities in exchange for national improvement projects that covered areas such as infrastructure, agriculture and the arts. One such program was the Works Progress Administration (WPA). The WPA was created as part of the Emergency Relief Appropriation Act in April, 1935 and renamed the “Works Projects Administration” in 1939 and was a government funded program that employed more than 8.5 million people on 1.5 million projects. One subdivision of the WPA was the “Federal Theater Project” (FTP) which included a segregated unit geared towards African American artists and performers known as “The Negro Theatre Project”, or NTP. This project established theaters in 23 cities throughout the U.S. between 1935 and 1939 and employed African American actors, directors, technicians and playwrights and apprentices.

The unit based out of Harlem was one of the best known in terms of its talent and output. It was initially led by Orson Welles and John Houseman, who were white, noted Black Directors Edward Perry, Carlton Moss, and H.F.V. Edward took over in 1936. Their theater productions included the Haitian adaptation of Shakespeare’s Macbeth directed by Orson Wells, Frank Wilson’s Walk Together, Children (1936) and Sweet Land (1937) by Conrad Seiler among others. Through this program, African American artists, technicians and writers were not only given an opportunity to work, but to perform roles that were typically reserved for white actors and artists.

Despite putting on around 1,200 productions and taking in $2 million in admissions revenue, more than other WPA projects, the Federal Theater Project was shut down after congressmen, who disliked the idea of government funding of the arts and falsely saw the FTP as an organization that disseminated Communism, removed funding for the program in the 1939 WPA bill. Members of the Harlem chapter of the NTP staged sit-downs, a form of nonviolent protest to fight these cuts to staff and funding. Unfortunately the cuts remained permanent and the WPA was eventually dissolved in 1943 as attention and the economy shifted to producing munitions and military personnel during World War II (1939-1945). Following the cuts to funding for the Federal Theater Project, African American theater professionals were unable to find work among their white counterparts, or were relegated to playing stereotypical roles in theater and film productions. However the sit-down strike as a form of protest would continue to inspire a new generation of Civil Rights activists who would use it and other tools to push for the end of segregation, and for equal treatment of African Americans in the 1950s and 60s.

Although we are still investigating how the flyer is connected to the papers of a local resident that were donated to our library, this humble flyer that states “On June 19th the people of Harlem will speak” has a message that resonates nearly a century after it was printed.