Yesterday was National Library Shelfie Day, where people are encouraged to share photos of their bookshelves! Today we’ve decided to go through our archives to show how our shelving has changed over the last 30 years! For more photos from our library’s past, be sure to check out our Flickr page here

In July 1993, the Moffat Library was wrapping up a year long renovation project to increase shelf space and update the original 1887 building to make the building ADA compliant. At this time, the building was owned by the Town of Blooming Grove, the title being transferred to them in 1956 after the library was unable to financially sustain itself. Town offices were located in the East Room, and a new addition for the Recreation Department was dedicated in 1976.

Funds were raised by the Friends of Moffat Library during a 1983 fundraiser campaign, but the project did not begin in earnest until May 1, 1992, 31 months after initial discussions began in 1989.

The construction and renovation project was overseen by Peter Hoffman, AIA and included the removal of Asbestos, drop ceilings in the East Room, which exposed the original windows and ceiling, the conversion of the former assessor’s office into a children’s reading room, young adult area, and stacks, as well as the creation of a director’s office and staff work area. The most prominent change was a handicapped accessible entrance on the South side of the building, and new circulation area.

The handicapped accessible entrance, as well as the additions on the East, and West wings of the building were eventually removed, or incorporated into the 2017 restoration and expansion of the Moffat Library, which won NYLA’s Public Library Building award for renovation in 2018. 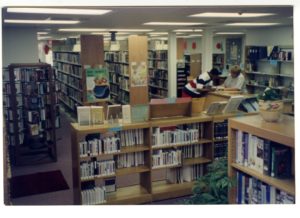 Following the aftermath of Hurricane Irene in October 2011, building damage forced the library collections to be moved to a temporary location provided by a local business person in Campbell Hall, New York. The original building suffered roof damage as well as water in the basement and mold. While the future of the building at this time seemed in doubt, the temporary location was modified to meet the needs of a public library including shelf space for materials for all ages, program room, and circulation area. 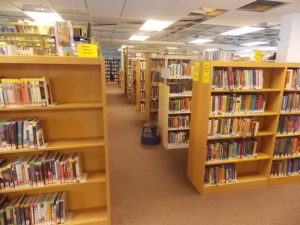 In 2012 the Town of Blooming Grove officially transferred ownership of the Moffat building to the Library Board of Trustees, who also acquired two adjacent properties on West Main Street in 2013. The firm of Roland, Butler & Mays was hired to determine a plan to update and expand the original building that had been abandoned following Hurricane Irene. A public forum was held and following input from the community, the plan was approved by the Board of Trustees in October 2014. On March 3, 2015 a Public Referendum for a $6.922 million bond the Additions and Renovations to the Moffat Library was held with the bond passing 733 yes votes to 289 no votes.  An official groundbreaking ceremony was held on May 24, 2016 and work on the restoration and renovation of the Moffat Library began.

On September 16, 2017 the grand reopening ceremony for the newly restored 1887 Moffat Library was held. The newly restored building boasted a Dedicated Children’s Room, Teen Program Space, Glassed-in Adult Quiet Reading Room, Conference Room, Community Meeting Room, and Local History Room. The two adjacent properties purchased by the Moffat Library Board, known as the Sweeney, and Hudson homes were demolished to make way for an expanded parking lot, the original buildings were beyond salvageable. Despite the Moffat Library suffering major damage during Irene, the building’s iconic stained glass windows, and four-faced Howard clock were completely restored to usher in a new century of service. This configuration of the library was the first time in the building’s 130 year history that bookshelves were placed in what was known as “Moffat Hall”. The Hall was originally used to hold lectures, concerts, school graduations, and charity dinners, but the space currently serves as our Adult Wing. However the replacement of our taller shelves used in the 1980s and 1990s for lower shelves that can be moved means the layout of these rooms can be converted to suit multiple needs and changing purposes, most recently during the 2020 Coronavirus Pandemic.

Library shelves serve an important storage purpose, but they also reflect the needs of the community and show the response of the library to meet them in the best way possible. 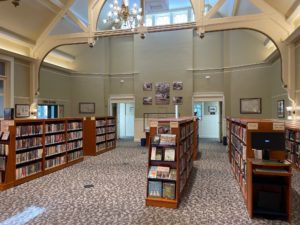 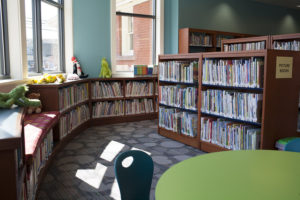