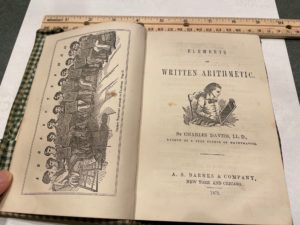 This week’s “Throwback Thursday” is this 1873 copy of Elements of Written Arithmetic textbook kept by Grace L. Wright (Hudson). Originally published in 1863 by Charles Davies (1798-1876), this book was part of a series of six books Davies produced to “present to the mind of the pupil the art, and to some extent the science of arithmetic, by a series of carefully constructed formulas of operation, with simple and concise rules”. Davies himself was a West Point Graduate (Class of 1815) and taught Mathematics, and Natural and Experimental Philosophy at his alma mater from 1816 to 1837, before teaching at Trinity College, Hartford, University of New York and Columbia. He would write and edit textbooks on mathematics until his death on September 17, 1876.

Grace Alma Wright (Hudson) (1864-1950) carried this textbook when she was probably eight or nine years old. Like students of later generations, Grace personalized her 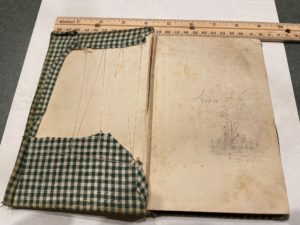 textbook by covering it and writing her name on the inside cover. The book is covered in scrap linen that would have been used in making shirts and attached to the book by a basic stitch that can be seen on the inside cover. Grace would go on to marry William J. Hudson (1861-1946) and raise a family of six children at the Hudson home on Hudson Road in Blooming Grove, New York.