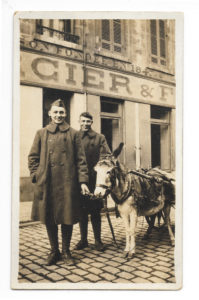 Today’s “Throwback Fursday” post shows two U.S. “Doughboys” next to a mule cart in occupied France c. 1918. The gentleman on the left is Howard D. Ronk (1893 – 1979) of Wallkill, Ulster County, New York. Howard served as a Private in Battery A, 334th Field Artillery, 162nd Field Artillery Brigade of the 87th Division during the First World War. Mules played an important part in this conflict as their agility and strength made them suitable for pulling supplies, and artillery pieces through the mud of Western Europe.

Howard’s sister Margaret (1879-1965) moved to Washingtonville with her husband Charles Overfield (1872-1948), and daughter Ruth (1905-1998). This photograph is not labeled but was found Ruth Overfield’s photo collection, so we assume it was given, or bequeathed to her by her uncle, who we were able to connect to her through genealogical notes, and military records!